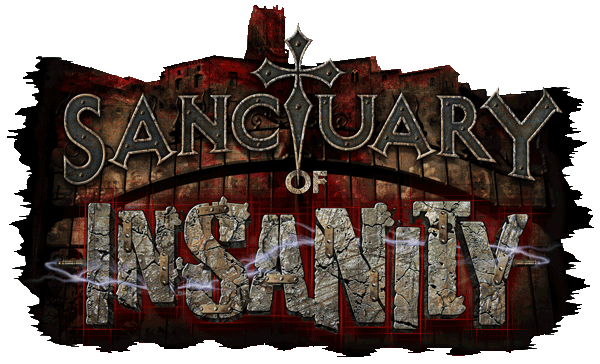 Back by popular demand, the fan favorite Sanctuary of Insanity is back and accepting new patients and introduces new characters!

Just like the other shows for the 2015 season, this too will be EXPANDED and REVAMPED to add even more terrifying and disturbing scenes and demented patients and offer you a new and unique tour unlike any we’ve offered in past years. The Sanctuary of Insanity, the asylum that houses society’s most criminally insane patients has experienced a complete collapse. An evil entity has made not only the patients even more disturbed, but the staff as well. Once you are officially committed, you will be “welcomed” to explore the actual halls of the asylum and come face to face with many deranged inhabitants, a couple of which are “The Black Widow”, the mysterious and supernatural entity that guides other patients to harm themselves and others, and “The Good Doctor”, a menacing and once brilliant doctor who’s mind is poisoned beyond repair and hungry for experimenting on you, his next patients. This is the most exciting expansion and enhancements to date for the Sanctuary of Insanity!

ALL NEW FOR 2015 prepare to meet the man who started it all, the owner and founder of the dreaded Sanctuary of Insanity Dr. Nolan Taylor, along with his equally disturbed twin sister Bonnie, and their maniacal henchmen known as the REAPERS, and more…(story below) 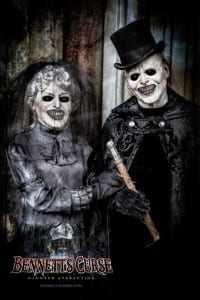 Dr Nolan Taylor, a name synonymous with evil and for the mistreatment of all those who had the misfortune of knowing him, as well as those being under his care seeking treatment.

A psychologist and land owner of renown, Dr. Nolan Taylor was part of a long family history of extremely successful business owners as well as great achievers in scientific and medical professions before and after emigrating to the New World.

During his youth, growing up just outside Baltimore Maryland, Nolan Taylor was increasingly agitated and often teased by his peers. Although he was taught at the top schools and teachers in the area, he often seemed angry, spiteful, and resentful. Though his fellow students were also affluent, he felt isolated, and it was believed he was depressed despite being a spoiled and very wealthy child. He longed to break away and get out from under the weight of his family name and it’s legacy. He feared knowing he could never be a respected “made man”, he would never be able to blaze his own trail and have the satisfaction of earning his own success and accolades since it will always be credited  to his more respected forefathers.

Despite being the son of a successful psychologist, it was clear to everyone that young Nolan was deeply disturbed mentally and emotionally, but it went ignored and untreated. Throughout his adolescence he would conduct bizarre experiment in the basement of the family manor. His basement laboratory was kept dark, locked away from the family and always a sickly smell of death permeated the walls above, but it too remained ignored. As his anger and hatred festered in his laboratory of death, it was soon discovered that his twin sister, Bonnie, who had been desperately trying to form a bond with her brother, has been for years sneaking into his the lab and pouring over her brother’s writings, hoping to learn more about him as a way of connecting with him. Over the years, she discovered the corpses of animals and humans alike and his sick and twisted methods of “curing” the mentally disabled. She became fascinated with the Occult, which would prove very useful to her brother in conjuring malevolent spirits to the asylum to torment their patients.

As Nolan was just completing his studies in the field of psychology, he decided to celebrate by inviting Bonnie to join him for a drink at a local pub. While the two huddled together in a dark corner stall, dimly lit by the light of a single candle, he informed his sister that he knew of her frequent visits to his chamber and that it was his design and plan to introduce her into his world. He described in detail his dark methods of torture and how she, as his twin sister and future assistant, will together open an asylum for the insane and begin accepting patients. As fate would have it, the fateful conversation  between the Taylor twins was overheard by a single man, believed to be a beggar and crouched in the corner booth was diligently writing and scribbling thoughts and ideas hoping to find direction for his writings. This man’s was name was Edgar Allan Poe, and It would appear,  he found his inspiration for his famous works from the world of the macabre…

This “Sanctuary” as Dr. Nolan Taylor often called it, was his way of making earning his legacy, and was the home for conducting his diabolical methods for “curing” his patients being housed there. His most trusted of servants, the ones he called his “REAPERS” were charged with robbing the corpses of the  recently deceased at their burials sites at night. These gravediggers would harvest  bodies that  were used for bizarre reanimation experiments.  The REAPERS also were called in to capture people they stalked on the streets of Baltimore to be locked up as test patients, as well as the day to day torture of already committed patients.

It is time for your stay at the Sanctuary, can you survive, mind intact, your journey through the deepest, darkest chambers in the Sanctuary, or will you fall victim to Dr. Nolan Taylor and his multitude of deranged servants of madness? The Sanctuary of Insanity awaits your arrival!